I was reviewing BNLX's EP #5 when I ran across the press information stating that their song, "Garbage Strike (It's Rubbish)" is a "well-done Smiths homage/parody". So instantly, I put on the song, and, well, I wouldn't exactly call it good. You can make up your own mind, by listening to the free song at: http://susstones.com/mainwp/

For those interested, BNLX is a band with Ed Ackerson (who used to be in a 90s band called Polara) and his wife, Ashley Ackerson (who used to be in The Mood Swings). BNLX is a very interesting project because the band's focus isn't making full albums, but concentrating on handmade EPs and selling them for $2.91 (possibly for just the materials). I don't know if it's working, but their shows are always packed. I'll be there to see them this Friday, with a Morrissey shirt on in silent protest.​
Continue…

Thee Stranded Horse cover "What Difference Does It Make?"

I just heard the song from BBC 6 Music Cerys Matthews.

The band's myspace / official site haven't provided any info yet.

The song will be released on 11th April.
http://www.bbc.co.uk/programmes/b00ytkjk
It was played 1:35 27th Feb programme.

DarkRiverArchive cover "Why Don’t You Find Out for Yourself?"

Update (Mar. 14 8:05am PT): Posted in the comments - people that have called See Tickets and venues are reporting Friday Mar. 18 as the actual onsale date.

Morrissey will play Plymouth Pavilions on Thursday 30 June in place of the previously announced concert at Cheltenham.

* Update: The Cheltenham date will now not take place, and once a substitute venue has been found then these shall constitute the only Morrissey concerts in...
Continue…

They are the most unlikely coupling. The Charming Man that is Morrissey and the 'tired and emotional' blues singer from Galway.

But The Diary [of The Irish Independent Newspaper] can exclusively reveal that Morrissey and Mary Coughlan are expected shortly to announce a number of festival appearances together in the UK this summer.

This development came about after the former Smiths singer turned up at Mary Coughlan's show in Dublin's Academy last Saturday night.

"Morrissey came to a gig of mine in Whelan's a few years ago so I knew he was a fan but it was still a shock when he rang up to find out what time I went on stage in the Academy.

"When I came on, there he was in the front row. I was slightly mortified," she revealed.

Worshipped by his own fans, 'Mozzer' was...
Continue…

"The Very Best of Morrissey" and "Glamorous Glue" sleeves - true-to-you.net

From True to you:

EMI releases for April include "The Very Best of Morrissey" and the single "Glamorous Glue." Both are released through the Major Minor label.
Continue…

Hop Farm, Damien Dempsey and new management confirmed on True To You:

Morrissey will be headlining at the Hop Farm Music Festival in Paddock Wood, Kent, on Saturday, 2 July 2011.

Damien Dempsey looks likely to be added to the bill.

Morrissey is now managed by Ron Laffitte, who is based in Los Angeles.
Continue…

Our man is at it again, this time at my favourite music venue, Vicar Street in Dublin.

The line-up for tonight runs as:-

sistasheila also posted in the forum thread the link with 5 photos: 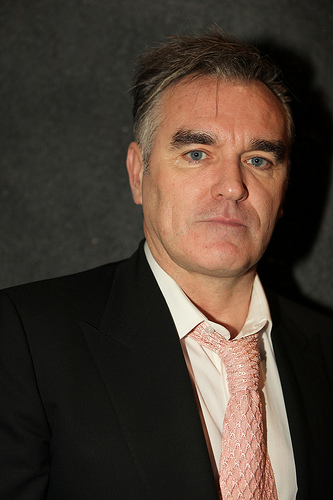 The 1981 gay pride march in Huddersfield -...
You're a mess who can't come to terms with your sexuality.
A moment ago
Surface
Moz/The Smiths sites in Blackpool?
Haha that is perfect!
13 minutes ago
PortraitOfMoz
Post Whatever You Are Thinking At This Very Moment
I think that's what we in the UK call mint green. Or possibly 'peppermint'...
17 minutes ago
Peppermint
Make Morrissey-Solo great again
Your problem seems to be transphobia... I'm not transphobic. I don't really...
52 minutes ago
Oh my
Strange/unexpected Moz references?
FWD.
Today at 10:30 AM
Famous when dead
Question about the players on the I Have...
Alain confused things with "wrong mix" and not 'remembering' if he played on...
Today at 10:10 AM
Famous when dead