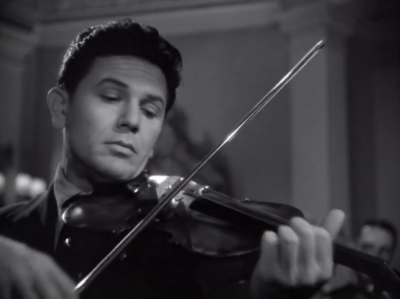 The type of scene that influenced Ringleader's cover art

Morrissey mentions the film's influence on the cover of Ringleader Of The Tormentors via Questions Answered (True-To-You.net, June, 2007):

The picture of you holding the violin on the cover of Ringleader Of The Tormentors is brilliant! What was the inspiration for it?

There is an American film from 1946 called "Humoresque" in which Oscar Levant holds up a copy of a magazine with John Garfield on the front playing the violin, as he does throughout the film. I thought the Garfield picture was so touching, so I tried to copy it. Interestingly, my right hand is cupped on the European version, but is straight on the US version.

Humoresque is a 1946 American melodrama film by Warner Bros. starring Joan Crawford and John Garfield in an older woman/younger man tale about a violinist and his patroness. The screenplay by Clifford Odets and Zachary Gold was based upon the 1919 short story "Humoresque" by Fannie Hurst, which previously was made into a film in 1920. Humoresque was directed by Jean Negulesco and produced by Jerry Wald.