Ringleader Of The Tormentors 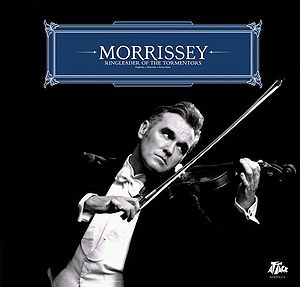 Ringleader Of The Tormentors is Morrissey's eighth solo album. The album was released on 03 April 2006 by Attack Records. Produced by Tony Visconti and co-written by Alain Whyte, Boz Boorer, and newcomers Jesse Tobias and Michael Farrell, the album yielded four Top 20 singles - You Have Killed Me, The Youngest Was The Most Loved, In The Future When All's Well and I Just Want To See The Boy Happy.

Issued in gatefold sleeve plus printed inner sleeve. The inside of the pocket on the main sleeve is printed with the same recurring insignia as on both sides of the inner sleeve. Issued in a standard jewel case with clear tray and a 12-page booklet that includes lyrics.

Recorded at Forum Music Village in Rome, 2005. Mastered at The Lodge, NYC. Recorded at Forum Music Village in Rome, 2005. Art direction at Stylorouge. Mastered at The Lodge, NYC. Ringleader of the Tormentors is the eighth studio album by English alternative rock singer Morrissey. It was released on 3 April 2006 by record label Attack. The album was described as showcasing "a thicker, more rock-driven sound", which Morrissey attributed to new guitarist Jesse Tobias. The album debuted at number 1 in the UK Albums Chart and number 27 in the US, and also reached number 1 in Sweden, Malta and Greece.