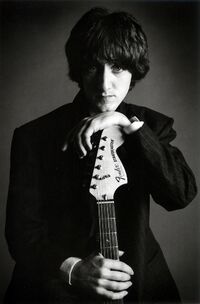 And what about Vini ­ had you followed his career in Durutti Column?
‘With a vague interest. Nothing deep. I’d never met him, or saw him play. But I had all his records. When it came to working on the album, it turned out that Stephen had produced Vini’s last record. Stephen suggested him, and it was perfect. What I liked was the extremity of his beauty, and the erratic quality. He’s also extremely humorous. The whole session was extremely humorous. But Vini’s not terribly interested in pop music, whereas Johnny was absolutely steeped in every manifestation of pop.’

Vini took several photographs circa the recording of Viva Hate. Some coming to light many years later:

English musician, born 4 August 1953 in Higher Blackley, Manchester, England, UK. Most famous for being the core member of The Durutti Column.

Vincent Gerard "Vini" Reilly (born 4 August 1953) is an English musician and leader of the post-punk group the Durutti Column. He is known for his distinctively clean, fluid guitar style, which stood out from his punk-era contemporaries in its incorporation of jazz, folk, and classical elements. In addition to his work under that group, Reilly has also collaborated with artists such as Morrissey, John Cooper Clarke, Pauline Murray, Anne Clark, and others.