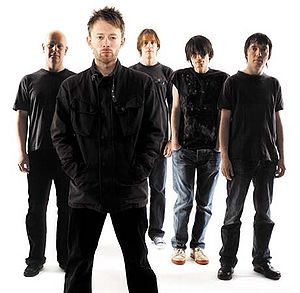 Radiohead were one of the few alternative bands of the early '90s to draw heavily from the grandiose arena rock that characterized U2's early albums. But the band internalized that epic sweep, turning it inside out to tell tortured, twisted tales of angst and alienation. Vocalist Thom Yorke's pained lyrics were brought to life by the group's three-guitar attack, which relied on texture -- borrowing as much from My Bloody Valentine and Pink Floyd as R.E.M. and Pixies -- instead of virtuosity. It took Radiohead a while to formulate their signature sound. Their 1993 debut, Pablo Honey, only suggested their potential, and one of its songs, "Creep," became an unexpected international hit, its angst-ridden lyrics making it an alternative rock anthem. Many observers pigeonholed Radiohead as a one-hit wonder, but the group's second album, The Bends, was released to terrific reviews in the band's native Britain in early 1995, helping build a more stable fan base. Having demonstrated unexpected staying power, as well as increasing ambition, Radiohead next released OK Computer, a progressive, electronic-tinged masterpiece that became one of the most acclaimed albums of the '90s.[1]

Among Radiohead members' earliest influences were Queen and Elvis Costello; post-punk acts such as Joy Division and Magazine; and significantly 1980s alternative rock bands such as R.E.M., Pixies, The Smiths and Sonic Youth.[2]

How do you feel about the new grown-up British rock bands - people like Radiohead or Coldplay?
Well I certainly envy the way they've been promoted, because I have never experienced that. With Coldplay, if you fail with that amount of promotion you must be pretty atrocious. They have been hammered into American society. The music bystifies me, because I don't understand why I have the monopoly on the word "miserable." Both of those bands sound very unhappy, with not a sign of a witty lyric. I might be wrong but I don't understand how they've escaped that accusation. I can't say I've enjoyed their records, no.

...In the driveway, he asked a favour. He wanted to modify a few things he said. "Please don't have me say anything unpleasant about Coldplay and Radiohead," he said. "There's no point to it, it just looks silly and mean. They're perfectly good bands, they're just not to my taste."
You called them Oldplay and Radiodead.
"I know. But I say a lot of things I don't mean."
And that was something I'd never heard from Morrissey before.

July 2003 issue of Spin, Thom Yorke of Radiohead on the cover

While talking about Thom Yorke being a gymnast in high school, Radiohead guitarist Ed O'Brien says "It's like how Morrissey was a great long-distance runner in high school - nobody knows that, either". Later on the article says that The Smiths are one of the bands top two influences, whom all 5 members love unequivocally.

Radiohead's Ed O'Brien made this statement in the June 2001 Mojo:

"My suggestion for OK Computer's follow-up had been to say, Let's go back top the well-crafted three-and-a-half minute song. I came from idolising The Smiths in the 80's and I thought that would be the shocking thing to do. It was really difficult because, as a musician, I express myself more emotionally then cerebrally."