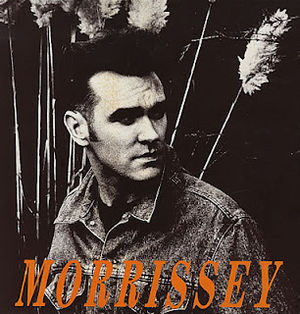 One November
Spawned a monster
In the shape of this child
Who later cried:
"But Jesus made me, so
Jesus save me from
Pity, sympathy
And people discussing me"
A frame of useless limbs
What can make GOOD
All the BAD that's been done?

And if the lights were out
Could you even bear
To kiss her full on the mouth
(Or anywhere?)

"November The Second" was officially released as a b-side on the Everyday Is Like Sunday re-issue on Sep. 26, 2010. It appeared originally as a rare unreleased 12" white label track. According to the post at eil.com:

MORRISSEY November The Second (Well if any disc deserves the title of 'Rarest Record Ever' then this unbelievable item has to be in the running. This is the UNRELEASED 12" white label track that was originally scheduled to promote the flagging sales Of The November Spawned album, a desperate and badly misinformed dance remix that Morrissey hated beyond belief and ordered all the masters and discs to be destroyed. This one survived and we can confirm it is a 100% genuine item that 'Ranks' as the ultimate for Smiths & Mozzer fans.

Following the end Of Morrissey's contract with EMI, they released the 'Suedehead: The Best of Morrissey' compilation which was originally scheduled to have a second disc of unreleased rarities (including November The Second') but due to a number of factors this was shelved and only the 19 track single disc was released.

There are a number of theories as to the reason, ranging from insufficient pressing plant capacity due to Elton John's Diana commemorative CD to what is reasonably accepted as to the real reason, that Morrissey hated the tracks and ordered that these not be released. EMI complied and the track then disappeared into obscurity - that is until now!!

Often rumoured not to exist, until extensive research clearly showed that the history of the track is correct, this is the one of a handful of copies in the world, which has long since been in the hands of an avid collector.

The white label has machine stamped matrix and pencil notations on the white bag. An unbelievable delight for any Smiths' collector - believe me I was tempted to keep it myself!!

Sell your granny, wife or yourself to have a chance of owning this item.

In September 1997, after their contract was up, EMI released Suedehead: The Best of Morrissey, a 19-track, single-disc overview originally outfitted with a second CD EP of unreleased rarities "November the Second," a long-rumored dance mix of "November Spawned a Monster" Morrissey detested and had deleted, was supposed to be included. As it turns out Morrissey does bear more grudges than high-court judges, and had the two-disc set blocked.

Or did he? I received an email shortly after this post first ran asserting that the second disc of Suedehead was in fact scrubbed to shore up EMI's pressing capacity for Elton John's treacle Diana death dirge, "Goodbye England's Rose." If this is true – Suedehead was released September 8th, 1997, one week after her death – any devout Morrissey fan knows where I'm going next: the infamous Diana-Morrissey Phenomenon , one of the more inspired flights of internet fantasy. For the uninitiated, know that Morrissey publicly referred to Princess Diana as "an incredibly boring woman" not long after her death, which makes this too hilarious – if unsubstantiated – a coincidence not to mention. (Not to spoil the party, but promotional copies of the 19-track Suedehead sans bonus disc were distributed to reviewers two weeks before Diana's death. This doesn't completely kill the fantasy, but I doubt it's true). 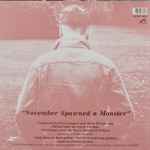 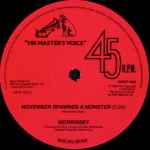 "November Spawned a Monster" is a song by British singer Morrissey, released as a single in April 1990. It was written by Morrissey and Clive Langer and features one of Morrissey's former colleagues from the Smiths, Andy Rourke. The single reached number 12 on the UK Singles Chart. It, along with its B-side "He Knows I'd Love to See Him", appears on his compilation album Bona Drag. In November 2014, Alex Broun's play November Spawned a Monster, inspired by Morrissey's song, premiered at The Old Fitzroy, in Sydney, Australia, directed by Robert Chuter and starring James Wright.