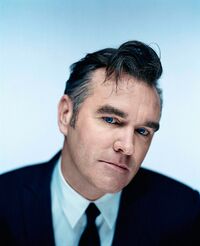 His own younger image featured as a backdrop during Once I Saw The River Clean's live debut (2020) and then at his Vegas residency during Never Had No One Ever (2021). Also as a tour t-shirt circa 2013:

Image from Nürburg (2006) used as a backdrop in 2016 during Good Looking Man About Town:

British singer and songwriter (born May 22, 1959, in Manchester, UK), best known as the former lead singer and co-founder of The Smiths with Johnny Marr. He began his music career in the late 1970s as a lead singer for punk bands. He formed Sulky Young (renamed The Tee Shirts) and later paired for a short time with Billy Duffy for a handful of live performances. In 1982, Morrissey and Marr formed The Smiths, and he remained in the band until he decided to leave in late 1987. He debuted as a solo artist in 1988.

Previously worked at the Inland Revenue.

Steven Patrick Morrissey ( MORR-iss-ee; born 22 May 1959), known professionally as just Morrissey, is an English singer and songwriter. He came to prominence as the frontman and lyricist of rock band the Smiths, who were active from 1982 to 1987. Since then, he has pursued a successful solo career. Morrissey's music is characterised by his baritone voice and distinctive lyrics with recurring themes of emotional isolation, sexual longing, self-deprecating and dark humour, and anti-establishment stances. Born to working-class Irish immigrants in Davyhulme, Lancashire, Morrissey grew up in nearby Manchester. As a child, he developed a love of literature, kitchen sink realism, and 1960s pop music. In the late 1970s, he fronted punk rock band the Nosebleeds with little success before beginning a career in music journalism and writing several books on music and film in the early 1980s. He formed the Smiths with Johnny Marr in 1982 and the band soon attracted national recognition for their eponymous debut album. As the band's frontman, Morrissey attracted attention for his trademark quiff and witty and sardonic lyrics. Deliberately avoiding rock machismo, he cultivated the image of a sexually ambiguous social outsider who embraced celibacy. The Smiths released three further studio albums—Meat Is Murder, The Queen Is Dead, and Strangeways, Here We Come—and had a string of hit singles. The band were critically acclaimed and attracted a cult following. Personal differences between Morrissey and Marr resulted in the separation of the Smiths in 1987. In 1988 Morrissey launched his solo career with Viva Hate. This album and its follow-ups—Kill Uncle, Your Arsenal, and Vauxhall and I—all did well on the UK Albums Chart and spawned multiple hit singles. He took on Alain Whyte and Boz Boorer as his main co-writers to replace Marr. During this time his image began to shift into that of a burlier figure who toyed with patriotic imagery and working-class masculinity. In the mid-to-late 1990s, his albums Southpaw Grammar and Maladjusted also charted but were less well received. Relocating to Los Angeles, he took a musical hiatus from 1998 to 2003 before releasing a successful comeback album, You Are the Quarry, in 2004. Ensuing years saw the release of albums Ringleader of the Tormentors, Years of Refusal, World Peace Is None of Your Business, Low in High School, California Son, and I Am Not a Dog on a Chain, as well as his autobiography and his debut novel, List of the Lost. Highly influential, Morrissey has been credited as a seminal figure in the emergence of indie rock and Britpop. In a 2006 poll for the BBC's Culture Show, Morrissey was voted the second-greatest living British cultural icon. His work has been the subject of academic study. He has been a controversial figure throughout his music career due to his forthright opinions and outspoken nature—endorsing vegetarianism and animal rights, criticising royalty and prominent politicians. Morrissey has also held controversial views, such as supporting far-right activism with regard to British heritage, and defending a particular vision of national identity, critiquing the effect of immigration on the UK.