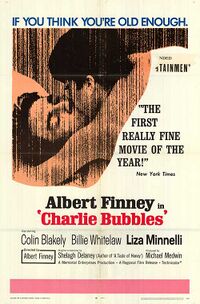 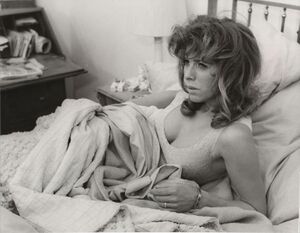 A still of Billie Whitelaw from this film was used for the cover of William,_It_Was_Really_Nothing (Vinyl repress).
It was written by Morrissey favourite Shelagh Delaney
Upon the death of Albert Finney, Morrissey stated via Morrissey Central (February, 2019):

" … he dies, a part of me dies … his refusal to accept a Knighthood - that moronic delusion of inclusion - elevates him further in the Arts and humanities. Albert was Manchester. Please watch Charlie Bubbles. … … there must be something I can dream tonight … "

Charlie Bubbles is a 1968 British comedy-drama film directed by Albert Finney in his feature directorial debut. The film stars Finney alongside Billie Whitelaw and Liza Minnelli. It was screened at the 1968 Cannes Film Festival on the 11th, just before the festival was called off due to the events of May 1968 in France. The film made great play of its Manchester setting, contrasting the return of its eponymous lead character, played by Finney, to his home city after achieving success as a writer in London. During his return, he visits his former wife, played by Whitelaw, in Derbyshire, and watches a Manchester United match at Old Trafford (featuring footage of Bobby Charlton and Denis Law) with his son. They are cut off from the outside world in a glass-fronted box as they watch the match. Finney's character is bored with his success and his privileged position, which allows him to indulge himself in most ways he wishes. One of these is a relationship with his secretary Eliza, played by Minnelli.