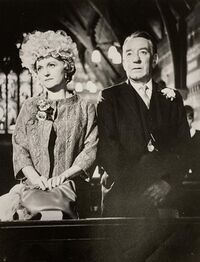 One of Morrissey's favourite films: The Family Way features Avril Angers.
A still of Avril from the film was used as the cover of the I Started Something I Couldn't Finish single.
In an interview in 1988, Morrissey responds to Simon Reynolds saying:

You encourage the obsessiveness, though, don’t you? I remember you once saying you were delighted people sent you underwear, or demands for underwear . . .

‘Yes, both! No, I do get lots of very fascinating and fascinated letters, and lots of fascinating gifts. I can very clearly understand obsessiveness, and the people who write to me see that I understand obsession and preciousness. And I respond in the same way. I still get very nervous when I meet people I admire . . .’
Like who?
‘Avril Angus . . .’
Who?
‘Well, exactly ­ Avril Angus! She acts. I get very nervous when I meet people from the theatre. I think that’s a very hallowed, sacred thing to be in. And I still have scrapbooks.’

Avril Angers was an English stand-up comedienne and actress. Her various roles on television include Dad's Army, Are You Being Served?, Odd Man Out, All Creatures Great and Small as well as playing Norah Dawson in Coronation Street in 1961.

Florence Avril Angers (18 April 1918 – 9 November 2005) was an English stand-up comedian and actress. The Daily Telegraph described her as "one of the most zestful, charming and reliable character comediennes in the postwar London theatre".