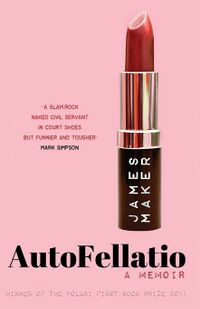 James Maker's Autobiography.
Published 1st in 2011 and then republished by Inkandescent in August, 2017.
The book's back leaf description:

"Apart from herpes and Lulu – everything is eventually swept away. Just one shimmering pearl of wisdom from popstar and polymath James Maker, whose worldly observations will (like herpes) once again be on everyone’s lips thanks to his award-winning memoir, remastered with new chapters. If you hadn’t heard of rock bands Raymonde or RPLA – fronted by James in the 80s and 90s – you might be forgiven for mistaking AutoFellatio for fiction. But here fact is more fantastical than any novel, as we follow our hero from Bermondsey enfant terrible to Valencian grande dame, a scenic journey that stops off variously at Morrissey confidant, dominatrix, singer, songwriter and occasional actor, and is literally littered with memorable bons mots and hilarious anecdotes that make you feel like you've hit the wedding-reception jackpot of being unexpectedly seated next to the groom's flamboyant uncle. According to Wikipedia, very few men can perform the act of autofellatio. We never discover whether James is one of them but certainly, as a storyteller, he is one in a million. WINNER OF THE POLARI FIRST BOOK PRIZE 2011"

He dedicates an entire chapter to meeting Morrissey and his relationship with him there after.

"The young Morrissey garret was a microcosm of Pop symbolism. The walls were covered in large, framed photographs of the New York Dolls and James Dean along with a signed print of the British comedy actress Esma Cannon. A Remington typewriter was positioned under a window that looked out to a small and scarcely-used garden where the family cat, Tibby, was buried. Mournfully, not buried deep enough as Tibby had a propensity to resurface in heavy rainfall. There was a bookcase stuffed with classic English literature, modern American titles, film compendiums and feminist writing. All along the floor of one wall were stacked a raft of vinyl records in alphabetical order. It was an enclosed world, seemingly independent of its surroundings, which could have been either a sanctuary or a cell depending upon one’s taste in curtains. But, certainly, it was from within these four walls that were formulated many of the ideas and the themes one would later see in their various manifestations: words, sleeve design, videos. It was midnight. I expect that I had not eaten since before boarding the train in London earlier that morning. I asked him whether I could have some cheese before retiring to bed. ‘You should by rights be on a mortuary slab at this stage, and your primary concern is cheese?’ Thus began a friendship and a correspondence spanning more than three decades."