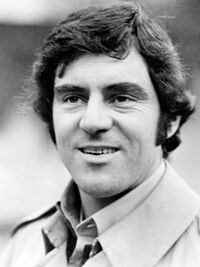 A sample of Newley from the 1948 film version of Oliver Twist is used on Billy Budd.
He is also sampled at the beginning of Maladjusted.
Newley singing has featured on many pre-show tracks throughout the years.

English actor, singer and songwriter, born 24 September 1931 in Hackney, London, England, UK and died 14 April 1999 in Jensen Beach, Florida, USA. He was married to Joan Collins from 1963 to 1971, their daughter is Tara Newley. Inducted into Songwriters Hall of Fame in 1989. Often collaborated with Leslie Bricusse.

Anthony Newley (24 September 1931 – 14 April 1999) was an English actor, singer, songwriter, and filmmaker. A "latter-day British Al Jolson", he achieved widespread success in song, and on stage and screen. "One of Broadway's greatest leading men", from 1959 to 1962 he scored a dozen entries on the UK Top 40 chart, including two number one hits. Newley won the 1963 Grammy Award for Song of the Year for "What Kind of Fool Am I", sung by Sammy Davis Jr., and wrote "Feeling Good", which became a signature hit for Nina Simone. His songs have been performed by a wide variety of artists including Fiona Apple, Tony Bennett, Barbra Streisand, Michael Bublé and Mariah Carey. With songwriting partner Leslie Bricusse, Newley was nominated for an Academy Award for the film score of Willy Wonka & the Chocolate Factory (1971), featuring "Pure Imagination", which has been covered by dozens of artists. He collaborated with John Barry on the title song for the James Bond film Goldfinger (1964), sung by Shirely Bassey. An "icon of the early 1960s", his TV series, The Strange World of Gurney Slade, "continues to have a cult following due to its advanced postmodern premise that [he] is trapped inside a television programme."Described by The Guinness Book of British Hit Singles & Albums as "among the most innovative UK acts of the early rock years before moving into musicals and cabaret", Newley was inducted into the Songwriters Hall of Fame in 1989.