Morrissey discusses the still of Terence Stamp from this film in Autobiography:

"I nominate Pretty girls make graves as the third single, but a bastion of bearded Rough Trade battleaxes drop on me like a ton of beansprouts and argue against a song with a title that would have made Mary Wollstonecraft throw in the tea-towel. I am shouted down, and Rough Trade wheel out What difference does it make? as the next single. I had loved the song until its defilement on The Smiths album; the loose swain’s saunter now sounded stiff and inflexible, the drums sounding too frightened to move, the voice sounding like something gone to its reward – or, at least, resting in peace. I use a photograph of Terence Stamp as the sleeve image partly because I am assured that clearance can be gained from Stamp through Geoff’s mutual friendship with Sandie Shaw. Once the single is issued, Terence Stamp objects and will say (years later) that ‘Morrissey did not ask for approval.’ A new shot is panicked together, wherein I imitate the Stamp shot, although I choose to hold a glass of milk in place of Stamp’s strychnine-soaked muslin cloth. I am ugly against Stamp’s glamor-handsomeness, but it will have to do, since the single has already risen to number 12. Evidently Rough Trade are quite pleased about the sudden censoring of the original sleeve, because it might mean that collectors buy the single with the new sleeve also, thus bumping up sales." 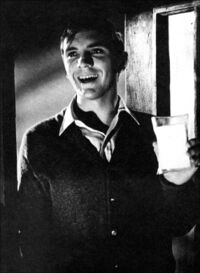 Still from The Collector used as cover art

The Collector is a 1965 psychological horror film directed by William Wyler and starring Terence Stamp and Samantha Eggar. Its plot follows a young Englishman who stalks a beautiful art student before abducting and holding her captive in the basement of his rural farmhouse. It is based on the 1963 novel of the same title by John Fowles, with the screenplay adapted by Stanley Mann and John Kohn. Wyler turned down The Sound of Music to direct the film. Most of the film was shot on soundstages in Los Angeles, though exterior sequences were filmed on location in London, Forest Row in East Sussex and Westerham in Kent. Filming occurred in the late spring and early summer of 1964. Wyler's original cut ran approximately three hours but was trimmed to two hours at the insistence of the studio and producer. The Collector premiered at the Cannes Film Festival in May 1965, where both Stamp and Eggar won the awards for Best Actor and Best Actress, respectively. Upon its theatrical release in June 1965, the film received largely favourable reviews. Eggar won a Golden Globe Award for Best Actress in a Motion Picture – Drama for her performance, and was also nominated for the Academy Award for Best Actress, while Wyler received a nomination for Best Director. It was the last of Wyler's record 12 Academy Award nominations for Best Director.