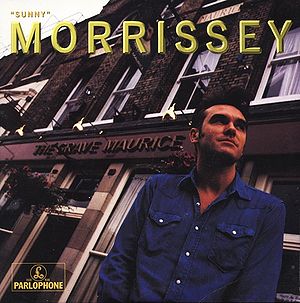 The sleeve design is attributed to "Graves of Spinsters" which was a phrase he would use again to describe "Ringleader Of The Tormentors" at a live show (Düsseldorf, December 15, 2006).

Well, you punched and fell
And you felt embarrassed
My heart goes out to you

So, Sunny send at least one thoughtful letter
My heart goes out to you
Tell us all how things are so much better
My heart it left with you
What else can I do?

They're not forgiving you
And you're not even wrong
With your jean belt wrapped around your arm
Oh, Sunny, my heart goes out to you
And with the needle pressed onto tight skin
Sunny I cry when I see where it's taking you

Video with preamble from Morrissey:

J-card case, 2 panel J-card inlay, printed on one side only.

"Sunny" is a song by Morrissey, released as a single in December 1995. It was released by EMI to try to cash in on Morrissey's Southpaw Grammar album that had been released that year by RCA and consisted of three songs that Morrissey had recorded while under contract to EMI. "Sunny" had initially been planned to appear on the "Boxers" single released in January 1995, and "Black-Eyed Susan" had at one point been allocated to be the B-side of "The More You Ignore Me, the Closer I Get" in 1994.