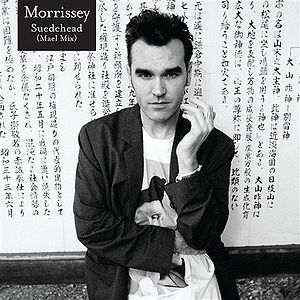 "Suedehead" was Morrissey's debut single as a solo artist. Released on 27 February 1988 by HMV Records, the single came a mere nine weeks after The Smiths' single "Last Night I Dreamt That Somebody Loved Me" from their final album, Strangeways, Here We Come. "Suedehead" was produced and co-wrote by Stephen Street, and was the first single released from Morrissey's debut album, Viva Hate.

Recording for Viva Hate commenced at The Wool Hall studios in Bath, England in early October and would last until late December. During one of the sessions, EMI executives stopped by the studio to check up on the recording progress, to which Street played them a rough mix of "Suedehead". The executives responded positively which, according to Street, gave he and Morrissey a better sense of freedom with the album and the confidence that they were heading in the right direction.

Upon release, "Suedehead" reached the #5 slot in the UK charts. With the momentum of a hit single, two weeks later Viva Hate was released and debuted at #1 on the charts.

THE MAELS MIX MOZ
Ron and Russell were invited to take part in a themed remix album called The 80’s Remixed on which various artists get to remix another compatible or comparative artist whom they admire. Warner Bros. gave the Maels the choice of remixing a Smiths song or a Morrissey song. They chose to do a unique and extreme 6-1/2 minute remix of “Suedehead”, and Moz happily gave them his blessing. The masterful Mael mix is heavy on vocals and set to a completely different chord progression. The label was gracious enough to let Ron and Russell do their own thing, sparing them the horror of doing a redundant club mix. The album will be released in the UK in April.

On 21 April 2012, in celebration of Record Store Day, EMI released a limited edition 10" picture disc, and a subsequent digital download on 23 April, of "Suedehead" (Mael Mix), edited down from the original version released in 2006 from 6:37 to 3:35. The single also feature two previously unreleased BBC live versions of "We'll Let You Know" and "Now My Heart Is Full", recorded at London's Theatre Royal, Drury Lane in February 1995.

You had to sneak into my room
'Just' to read my diary
It was just to see, just to see
All the things you knew
I'd written about you
Oh so many illustrations

Recorded at the Wool Hall in Bath.

Runouts are stamped except for "DREAMS...ARE JUST...DREAMS", which is etched. 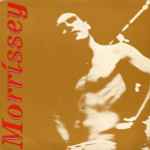 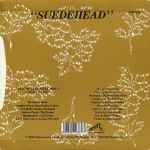 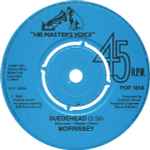 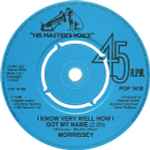 Versions were released with and without the "Morrissey" sticker on the cover.

"Suedehead" is a 1988 single by English singer Morrissey, released on 15 February 1988. Co-written by Morrissey and former Smiths producer Stephen Street, the song was Morrissey's first solo release after the Smiths break-up. Morrissey was inspired lyrically by the suedehead subculture, recalling an individual from his teenage years in the context of the movement. Street, who had originally sought to contribute his musical ideas to Morrissey to use for Smiths B-sides, also contributed bass guitar, while Vini Reilly and Andrew Paresi rounded out his new solo band. "Suedehead" was featured on Morrissey's debut album, Viva Hate, and the compilation album Bona Drag, the latter of which also featured the B-side "Hairdresser on Fire". Upon release, the song saw commercial success, reaching number five in the UK, as well as rave reviews for its Smiths-esque musicianship and the new Morrissey-Street writing team. Encouraged by the success of the single, Morrissey would continue working with Street for subsequent singles and the rest of Viva Hate. Since its release, "Suedehead" has become one of Morrissey's most successful songs and remains critically acclaimed by modern writers.