Morrissey was given the Linda McCartney Memorial Award by PETA in 2005:

"On September 10, 2005, in Hollywood, California, as a result of all of his hard work for animals, PETA will be honoring Morrissey with the Linda McCartney Memorial Award at our 25th Anniversary Gala." 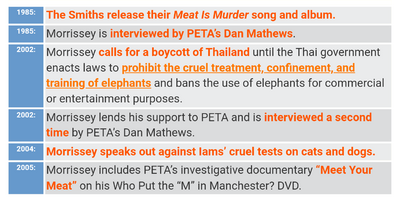 From an archived PETA article.

People for the Ethical Treatment of Animals (PETA; , stylized as PeTA) is an American animal rights nonprofit organization based in Norfolk, Virginia, and led by Ingrid Newkirk, its international president. PETA reports that PETA entities have more than 9 million members globally. Founded in March 1980 by Newkirk and animal rights activist Alex Pacheco, the organization first caught the public's attention in the summer of 1981 during what became known as the Silver Spring monkeys case. The organization opposes factory farming, fur farming, animal testing, and other activities the group considers as exploitation of animals.