Here is London, giddy of London
Is it home of the free, or what?

Can you squeeze me
Into an empty page of your diary
And psychologically save me?
I've got faith in you

I sense the power in the fingers
Within an hour, the power
Could totally destroy me
Or it could save my life

Oh, here is London
"Home of the brash outrageous and free"
You are repressed
But you're remarkably dressed, is it real?

And you're just so busy
Busy, busy, busy scissors, ooh, oh
Hairdresser on fire
Only the other day

Was a client, over-cautious
He made you nervous
And when he said "I'm gonna sue you"
Oh! I really felt for you

So, can you squeeze me
Into an empty page of your diary
And supernaturally change me?
Change me, change, oh

Here in London
"Home of the brash, outrageous and free"
You are repressed but
You're remarkably dressed, is it real?

And you're just too busy
To see me, busy clippers
Oh, oh, hairdresser on fire
Only the other day

Originally issued with the Japanese edition of Viva Hate.

Pressed with black labels, and 非売品 (Promo/Not for Sale) printed on the labels. B-side graphic-etching of Morrissey “HAIRDRESSER ON FIRE” and the silhouette artwork used for the Suedehead single. One-sided, black-&-white, English/Japanese lyric insert included. 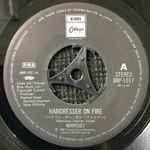 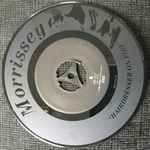 "Hairdresser on Fire" is a song by Morrissey, first released as a B-side to his debut solo single "Suedehead". Co-written by Morrissey and producer Stephen Street, the song features lyrics expressing Morrissey's frustration with being unable to see his hairdresser. In addition to its appearance on the "Suedehead" single, "Hairdresser on Fire" has appeared on the American release of Morrissey's debut solo album Viva Hate, as well as his 1990 compilation album Bona Drag. Since its release, the song has seen critical acclaim for its jangly, string-inflected music and Morrissey's witty lyricism. It has since become a fan favorite, appearing on multiple compilation albums and as well as multiple iterations of Morrissey's live setlist.