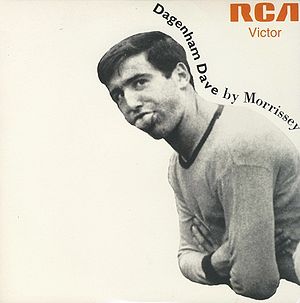 1. Dagenham Dave 2. Nobody Loves Us 3. You Must Please Remember

I love Karen, I love Sharon On the window screen With never the need to fight Or to question A single thing

℗ 1995 The copyright in this sound recording is owned by BMG Records (UK) Ltd.

"Dagenham Dave" is a song by Morrissey, released as a single in August 1995, a week prior to the release of Southpaw Grammar. It was Morrissey's first release on RCA, the label he had signed to after leaving EMI. This was the second Morrissey solo single not to feature the singer on the cover, instead English football coach and former player Terry Venables is pictured sticking out his tongue. Venables was born in Dagenham.The promotional video for the single featured former Grange Hill actor Mark Savage as the titular Dave.The single reached number 26 on the UK Singles Chart.It is not related to the song of the same name by The Stranglers, from their 1977 album No More Heroes. "Dagenham Dave" is also naval slang for someone who is somewhat unstable or crazy, Dagenham being close to Barking ("barking mad").