Apologies if this has been posted before:

"We have to warn Matt and Trey that what they are doing is stupid and they will probably wind up like Theo Van Gogh for airing this show," warned the posting, written in the name of Abu Talhah Al-Amrikee.

"This is not a threat, but a warning of the reality of what will likely happen to them," it added.
Man hands on misery to man.
It deepens like a coastal shelf.
Get out as early as you can,
And don't have any kids yourself
Y 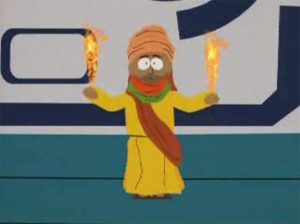 Killing Trey and Matt will only make them martyrs for free speech.

Whoa, I'd be shitting my pants. (He's going to spray them with Cologne or something.)
From Dr Kibbles to Dr Giggles. Blah. Blah. Blaaah.​

The newest episode is available at sbchannel.com

The funny thing is, Mohhammed was never actually in the Bear suit in the first part of the story. It is revealed they put someone else in there.

Matt and Trey are pretty pissed because they didn't censor the latest episode where even the word Mohhammed is bleeped out. Comedy Central did that and didn't tell them about it.
"Cried over my supper, it revived. Got off the table... started to fly."

Subscriber
Well that's right. Because their all-powerful mighty God and Prophet can't take a joke from someone who doesn't share their view.

I despise religious nutters of every type.

I also read that Kyle's ending speech was bleeped out despite it having NO reason to be censored. The speech was about intimidation and fear, and ironically Comedy Central was too intimidated and fearful to air the lesson.
S

Anonymous said:
I also read that Kyle's ending speech was bleeped out despite it having NO reason to be censored. The speech was about intimidation and fear, and ironically Comedy Central was too intimidated and fearful to air the lesson.
Click to expand...

My guess, Anonymous, is that Comedy Central was probably afraid that if they did air the episode, uncensored, and there happened to be an attack on US soil, that they would be blamed for it. And for the decisions they made against censoring the episode, i can totally understand why they did it, although many people, themselves included, aren't happy about it. Unfortunately, the Dutch cartoonist was made an example of.
F

Spinster said:
Unfortunately, the Dutch cartoonist was made an example of.
Click to expand...

Whoops! I stand corrected. Sorry about that.

Spinster said:
Why are people of this religon so thin-skinned that they can't take being made fun of like the other religons have been?
Click to expand...

No ones come out with the old 'It's only a handful of extremists' yet.
[SIGPIC][/SIGPIC]
Scratch my name on your arm with a fountain pen
(This means you really love me)​
S

Absolutely pathetic. All the problems in the world and those dear extremists take offence at a cartoon that regularly takes the piss out of everything.

Some of the coolest people I've ever met are Muslim, yet this extremist problem has made just the word Muslim synonymous with evil. This cult needs to be terminated so the world can move forward.

j funk said:
No ones come out with the old 'It's only a handful of extremists' yet.
Click to expand...

It's only a handful of extremists.

I think it's funny the way Americans say muslims.
You must log in or register to reply here.

Michel Houellebecq's 'Submission', the state of Europe, and other related thoughts