I'm not even lying:

A new hypothetical particle could solve two cosmic mysteries at once: what dark matter is made of, and why there’s enough matter for us to exist at all.

“We know you have to have these two ingredients to the universe, both atoms and dark matter,” said physicist Kris Sigurdson of the University of British Columbia, coauthor of a paper describing the new particle. “Since you know you need those ingredients anyway, it seems like a natural thing to try to explain them from the same mechanism.”

Cosmologists think the same amount of matter and antimatter should have been created in the Big Bang, and particles and antiparticles immediately started colliding and extinguishing each other. But the fact that stars, planets and physicists exist now is proof that that’s not what happened.

“If matter and antimatter were created in equal amounts in the early universe, they would all have annihilated [each other],” said theoretical physicist Sean Tulin of the Canadian physics institute TRIUMF. “There has to be some asymmetry that was left over.”

Together with physicists Hooman Davoudiasl at Brookhaven National Lab and David Morrissey of TRIUMF, Tulin and Sigurdson suggest a way to solve the problem of missing antimatter: Hide it away as dark matter. The details are published in the Nov. 19 Physical Review Letters.

“If our theory is right, it would tell you what dark matter is,” Tulin said.

And here's the abstract. Love Morrissey, but hate most Morrissey fans? Then this is the FB group for you.
​
F 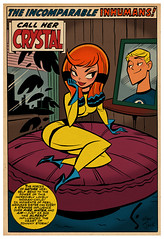 is not a member

Not Right in the Head said:
I'm not even lying:

the "& colleagues" bit gives it away though...
You must log in or register to reply here.