"Billy, who has played guitar since the age of 14, inspired The Smiths legend Johnny Marr to start performing as a guitarist after the younger musician overheard him rehearsing with his high school band across the street from where he lived on Altrincham Road in Baguley.

In 1978 at a gig at the Manchester Apollo Billy introduced Johnny to his friend and fellow fan of the underground New York punk rock scene Stephen Morrissey, who he performed with in the short-lived punk band the Nosebleeds.

Johnny and Morrissey then went on to form The Smiths.

"We did just two shows." 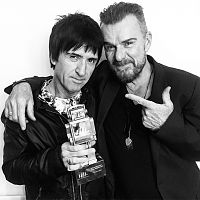 Vulgarian · From Birmingham, U.K.
Moderator
A

I thought I'd read that Moz & Marr hadn't actually met at this concert? I'm sure I read (Severed Alliance) that Marr had seen Moz at a concert but they never actually spoke at that time...I don't have the book to hand so stand ready to be corrected...

With a v, not ph.
Is MEN supposed to be a newspaper?
V

some of the worse CLAPTRAP ever recorded.
an insult to Sucko music

do you find Morrissey sexxy?

Anonymous said:
I thought I'd read that Moz & Marr hadn't actually met at this concert? I'm sure I read (Severed Alliance) that Marr had seen Moz at a concert but they never actually spoke at that time...I don't have the book to hand so stand ready to be corrected...
Click to expand...

They did meet at a Patti Smith concert, it's in Morrissey's Autobiography.

Anonymous said:
With a v, not ph.
Is MEN supposed to be a newspaper?
Click to expand...

Seriously, it’s not that hard. V, not PH.
That person on Instagram who posts all the lovely pictures keeps making the same mistake. Very annoying.

Christ, watch your back Billy.

Zoinks said:
They did meet at a Patti Smith concert, it's in Morrissey's Autobiography.
Click to expand...

Zoinks said:
They did meet at a Patti Smith concert, it's in Morrissey's Autobiography.
Click to expand...

Hmm, slightly conflicting then, not that it really matters [this from Severed Alliance]:

Four years before, Billy Duffy had shown Maher some lyrics that Morrissey had written for The Nosebleeds, and Johnny recalled that they were reasonably good. He was vaguely aware of Steven Morrissey as a person who wrote letters to the music press and remembered seeing him fleetingly at a Patti Smith concert at the Apollo, Manchester, on 31 August 1978. Morrissey was in the company of mutual friends from Wythenshawe, including Stephen Pomfret and Billy Duffy. It’s doubtful that they’d even spoken a word to each other at the time, beyond a quick hello, as Maher was merely tagging along. “I did not like him then,” Morrissey later admitted. “We were continents apart.”

Moderator
From Set The Boy Free:

"I went on my own to the Patti Smith show, but when I got there I saw Billy Duffy with a couple of guys in the bar. I went over and he introduced me to Howard Bates from Slaughter and the Dogs; Phil Fetcher, who I recognised from Wythenshawe; and a guy with glasses called Steven Morrissey, whose name I’d heard because he was in a new version of The Nosebleeds with Billy. I said hello and then went to see what was happening inside the hall.
I was stood right at the front when Patti Smith came on with her band, and it was like witnessing an incantation. I thought she was on another plane. The show was electricity, rock ’n’ roll and ritual, and the stage seemed like a different dimension, one I knew I had to live in myself. The next day the world felt different. It was another sign along the road."

Regards,
FWD.
Some of us is turning nasty
A

He had cancer? Couldn’t he just scrape it off?

Excerpt from Morrissey's Autobiography, after Johnny knocks on his door:

It had been in the foyer of the Ardwick Apollo, where Patti Smith had displayed her radiant stallions gradually lapping into seahorses nervousness. I stood in conversation with Philip Towman (another Wythenshawe musicologist), when Johnny first shoved his face in, and he said, ‘You’ve got a funny voice.’ The comment contained an oblique confession, which said: you don’t talk as shockingly bad as I do. In fact, Johnny later confessed that prior to meeting me he had pronounced the word ‘guitar’ without the t, so Ardwick-mangled the parlance. I couldn’t imagine how this would be possible, or how he could be understood. I am shaken when I hear Johnny play guitar, because he is quite obviously gifted and almost unnaturally multi-talented. Since he shows an exact perspective on all things, I can’t help but wonder: What is he doing here with me? Formulating writing systems and mapping out how best to blend our dual natures – here, against the hiss of the paraffin lamp, and me wrapped in the sanctity of an enormous overcoat acquired in a Denver charity shop for $5. Why has Johnny not already sprayed his mark – elsewhere, with others less scarred and less complicated than I am? It seemed to me that Johnny had enough spark and determination to push his way in amongst Manchester’s headhunters – yet here he was, with someone whose natural bearing discouraged openness. Stranger still, we get on very well. It is a matter of finding yourself in possession of the one vital facet that the other lacks, but needs.
C

Quite right he’ll be like a rat up a drain pipe billy.
A

Billy's ass cancer was no laughing matter.
You must log in or register to reply here.