The Chicken of D.C.

Why even strict vegans should feel comfortable eating oysters by the boatload. 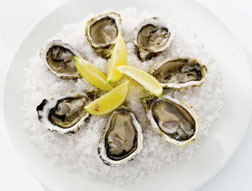 Are oysters vegan-friendly?Last summer, I visited a friend in San Francisco whom I hadn't seen in a while. Normally in such cases, I must gently remind my host that I eat neither meat, nor dairy, nor eggs, but my friend beat me to it: "I recall that you are a vegan," he wrote, "though one that appreciates fine oysters." Finally, someone who understands me. The trip went off without a hitch—I tore into some fantastic Point Reyes bivalves to go with my green salad, and friendship and comity were reaffirmed.

​
​
Because I eat oysters, I shouldn't call myself a vegan. I'm not even a vegetarian. I am a pescetarian, or a flexitarian, or maybe there's an even more awkward word to describe my diet. At first I despaired over losing the vegan badge of honor—I do everything else vegans do—but I got over it. Oysters may be animals, but even the strictest ethicist should feel comfortable eating them by the boatload.
There are dozens of reasons to become a vegan, but just two should suffice: Raising animals for food 1) destroys the planet and 2) causes those animals to suffer. Factory farms are the worst offenders, but even the best-run animal operations can't get around the fact that livestock are the largest contributors to global warming worldwide and that the same amount of land used to feed one beef-eater can feed 15 to 20 vegans. Animals are terribly inefficient machines for turning plants into food, and an inefficiency of this scale is disastrous. The animal welfare argument is even simpler: While there are limitless ways in which humans are different from nonhuman animals, one thing we share with most is the ability to feel pain. Since I consider it unethical to cause you, dear reader, undue pain, there's no reason—other than simple preference for my own species—to have a separate standard for mammals, fish, and birds.


But what if we could find an animal that thrived in a factory-farm cage, one that subsisted on nutrients plucked from the air and that was insensate to the slaughterhouse blade? Even if that animal looked like a bunny rabbit crossed with a puppy, it would be A-OK to hack it into pieces for your dinner plate. Luckily for those of us who still haven't gotten over the death of Bambi's mother, the creature I'm thinking of is decidedly less cuddly. Biologically, oysters are not in the plant kingdom, but when it comes to ethical eating, they are almost indistinguishable from plants. Oyster farms account for 95 percent of all oyster consumption and have a minimalnegative impact on their ecosystems; there are even nonprofit projects devoted to cultivating oysters as a way to improve water quality. Since so many oysters are farmed, there's little danger of overfishing. No forests are cleared for oysters, no fertilizer is needed, and no grain goes to waste to feed them—they have a diet of plankton, which is about as close to the bottom of the food chain as you can get. Oyster cultivation also avoids many of the negative side effects of plant agriculture: There are no beesneeded to pollinate oysters, no pesticides required to kill off other insects, and for the most part, oyster farms operate without the collateral damage of accidentally killing other animals during harvesting. (Relatedly, although it's possible to collect wild oysters sustainably, the same cannot be said for other bivalves like clams and mussels. These are often dredged from the seabed, disrupting an entire ecosystem. For that reason, it's best to avoid them.)
Moreover, since oysters don't have a central nervous system, they're unlikely to experience pain in a way resembling ours—unlike a pig or a herring or even a lobster. They can't move, so they don't respond to injury like those animals do, either. Even monkish ethicist Peter Singer sanctioned oyster eating in Animal Liberation—the best-argued case for a vegan diet I've read—before reversing his opinion for later editions of the book. To justify the flip-flop, he wrote that "one cannot with any confidence say that these creatures do feel pain, so one can equally have little confidence in saying that they do not feel pain." This is unconvincing: We also can't state with complete confidence that plants do, or do not, feel pain—yet so far Singer hasn't made a stand against alfalfa abuse.

The main argument of Animal Liberation is that discriminating against nonhuman animals is indefensible because it makes irrelevant category distinctions—pain cuts across species barriers. But to loop oysters into a dietary taboo simply because we've labeled them animals is to make just such a faulty distinction. Likewise, we shouldn't be eating more plants because they are in the plant kingdom; we should eat them because it's a sound way to feed ourselves without causing a lot of damage to the world. And oysters, as far as we can tell, belong with plants in almost every ethically relevant way.
When I became a vegan, I didn't draw an X through everything marked "Animalia" on the tree of life. And when I pick out my dinner, I don't ask myself: What do I have to do to remain a vegan? I ask myself: What is the right choice in this situation? Eating ethically is not a purity pissing contest, and the more vegans or vegetarians pretend that it is, the more their diets start to resemble mere fashion—and thus risk being dismissed as such. Emerson wrote, "A foolish consistency is the hobgoblin of little minds." A foolish consistency: If you resolve to give up foods that begin with the letter B, and if you stick to that for the rest of your life, you'll be mighty consistent. You'll even benefit the world by cutting out beef. But there's no good reason to avoid broccoli—unless, like George H.W. Bush, you don't like the taste. There is, on the other hand, great reason to be an inconsistent vegan and make an exception for oysters—for it is surely foolish to deprive yourself of an icy plate of white-shelled Watch Hills.
When I talked about this article with my editor at Slate, she said, "I won't lie—you'll be attacked viciously for being a vegan, and attacked equally viciously for not being a strict enough vegan." Maybe so, but if amid a sea of vitriol a meat-eater makes a great case that some other animal deserves to be treated as I've treated the oyster, or if a vegan comes forth with a good argument for why oysters should rightfully remain off our dinner plates, then I'll have to change my mind and my diet.
Peter Singer, for his part, showed some flexibility when I e-mailed him about this piece. "I've gone back and forth on this over the years," he said. "Perhaps there is a scintilla more doubt about whether oysters can feel pain than there is about plants, but I'd see it as extremely improbable. So while you could give them the benefit of the doubt, you could also say that unless some new evidence of a capacity for pain emerges, the doubt is so slight that there is no good reason for avoiding eating sustainably produced oysters." Here's to the vanquishing of hobgoblins—the first plate is on me.
Last edited: Apr 10, 2010
Yes, I'm posting again, but I still hate you all. Especially you. (Not you... You're a darling.)

Well, that would be fine if they didn't taste like a glob of cold snot.
B

PregnantForTheLastTime said:
Well, that would be fine if they didn't taste like a glob of cold snot.
Click to expand...

If it's a member of the animal kingdom, then I won't eat it. Period. There is no reason at all for me to take another creature's life when I don't need it to live.

"Take me out tonight"

PregnantForTheLastTime said:
Well, that would be fine if they didn't taste like a glob of cold snot.
Click to expand... I have a similar line of argument when it comes to veal being vegetarian - it is after all a by-product of the dairy industry. Male dairy cows are useless to farmers and are either slaughtered and burned or butchered for veal.

But then, I've always struggled to ethically justify my own vegetarianism - I don't eat meat of any kind, haven't done for 20 years or so, but I still eat eggs and dairy products - as long as they are free range. Veganism can be completely justified, but vegetarianism is just a bit, well, lilly livered liberal. Animals still suffer in the dairy industry, even the organic free range animals, but somehow we feel better for not eating meat. I hate the fact that we are a family of vegetarians but can't make the effort / commitment to become vegans.

well, maybe I am

Biologically, oysters are not in the plant kingdom, but when it comes to ethical eating, they are almost indistinguishable from plants.
Click to expand...

Biologically, this person is an idiot.

(an oyster has nerves, kidneys, blood vessels and a little heart!

5am said:
Biologically, this person is an idiot.

(an oyster has nerves, kidneys, blood vessels and a little heart!

we have a winner.

Was this an April Fools prank?

I do not understand how anyone could buy into this article.
I

I am a Ghost

I'm a veggie and the only Oyster I'd take is a card for the London Underground.

When I became a vegan, I didn't draw an X through everything marked "Animalia" on the tree of life.
Click to expand...

i think that's where she went wrong.

and what if only hamburger is available?

If hungry enough, it could be argued that it is the "right choice in this situation."

I guess this person can remain a vegan in his/her mind, because he/she is able to see "outside the box."
B

I think she'd eat whatever took her fancy at the time,passing by a burger bar must be an ordeal.

I am a Ghost said:
I'm a veggie and the only Oyster I'd take is a card for the London Underground.

Is Honey, the stuff from bees, vegan?