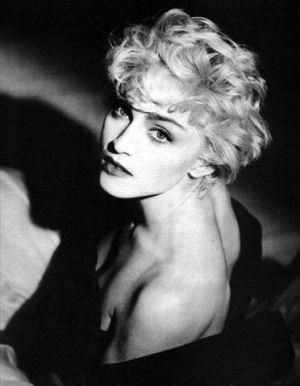 Madonna (born Madonna Louise Ciccone; August 16, 1958) is an American singer, songwriter, actress and entrepreneur. She has sold more than 300 million records worldwide and is recognized as the world's top-selling female recording artist of all time by Guinness World Records. Considered to be one of the "25 Most Powerful Women of the Past Century" by Time for being an influential figure in contemporary music, she is known for continuously reinventing both her music and image, and for retaining a standard of autonomy within the recording industry. Critics have praised her diverse musical productions which have also served as a lightning rod for controversy.[1]

"The whole spectrum of pop is being laid to rest. It's obvious that ultimately pop will end: the ashes are already around us. For example, Madonna has to be the last female icon. Where can it go from here?"

"Obviously Madonna reinforces everything absurd and offensive. Desperate womanhood. Madonna is closer to organised prostitution than anything else. I mean the music industry is obviously prostitution anyway but there are degrees.

"I must be quite honest," announces Morrissey of the Smiths. "I can understand that people can find me very irritating. And I accept that to an almost absurd degree, because I know that I'm not... I'm not... well, I'm not really a pop pushover."

"And that can irritate people, because they want their music to be quite simplistic, and they don't really want any fuss and bother and any seriousness. And I know I'll certainly never fit into that bill. But ultimately I feel that if people are saying no to the Smiths, they're saying yes to Madonna. And I find that the biggest sin of all."