A Nightmare On Maudlin Street 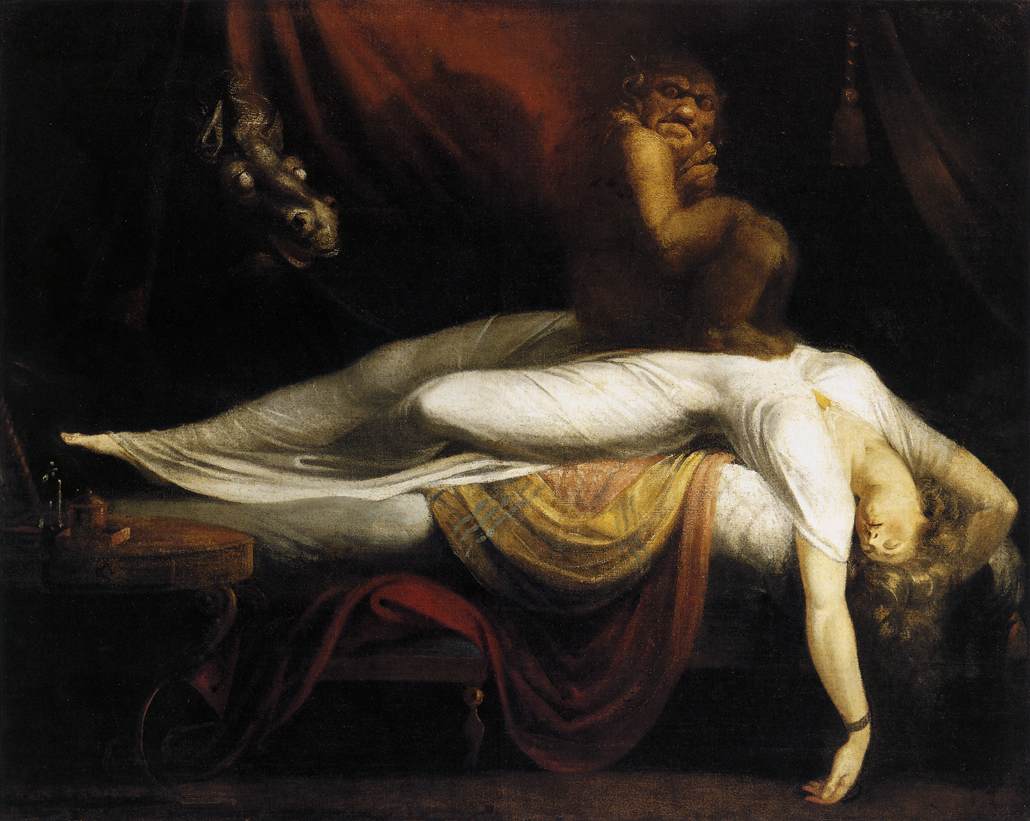 The Nightmare / Henry Fuseli
​
In this particular dream, I walked into a dimly lit room. There were three tables. Lying on one of those tables was an old friend of mine from high school. She looked just as she did when we were kids. Shoulder length blonde hair, striking blue eyes, cute as a button. She was smiling. I reached out to embrace her and she started to speak, but her voice was cracking with a low grovel and I couldn't understand what she was saying. I let go to look at her, but when I did, her body went limp, almost as though she was melting. I kept calling her name, panicking, because I had no fucking clue what was happening to her. A lady entered the room from behind me and dragged me from my friend, and as she did, I saw the girl slide off the table. I turned to follow her, but she was gone.

The next thing I knew I was in a long hallway and I had my cat (Ava) in my arms. I was trying to find a safe place to hide her. I was so scared that I was shaking and I knew that I had very little time. I peered out from a window and down below I could see the woman from before, and she was watching me. My friend was behind this woman, but her face was now contorted and discolored. Her bulging eyes rolling upwards. I could feel the fear in every part of my body.

I was then facing a door in a foyer. There was a large living room to my right and a dining room to my left. The hallway stretched out behind me. The light was on in the dining room but I was mostly in the dark. There was a chair next to the front door. I was expecting them now. I was ready for them and my fear had turned into madness. I heard a door creak in the hallway. I turned to see the woman running out from one of the rooms towards me. She was screaming. I ran towards her and we clashed, falling to the floor. I was on top of her, strangling her, but she was far too strong and pulled me off, dragging me towards the foyer. I managed to find my footing and I shoved her into the chair next to the door. She grabbed my arms, and I fought, but she pulled me in, close to her face.

At this point I woke up from the fear, but I couldn't stay awake. I couldn't even move. I found myself back in the foyer, but I was aware that I was dreaming. I looked around a corner into the hallway and there she was - hunched down on the floor. I ducked back and fell against the door, shouting to myself, "WAKE UP! WAKE UP! WAKE UP!" Then from behind I felt a massive shove.

This time I woke up, thank god. My heart was pounding and I was out of breath. It took me a while, but I finally opened my eyes. I could move, but it felt as though everything was in slow motion.

As I was typing out each scene here in my blog, I found the whole thing humorous and quite silly. Because it is funny. It was so vivid, though. I could hear every little noise, feel every bit of the fear crawling through me. I was really terrified! I remember most of my dreams. I believe they have meaning and we should learn from them. I don't know what this dream was trying to convey, but I hope I never have to go through that again!
Share:
Facebook Twitter Email Link