OK- it's time. I know Di does her awesome photoshops of Moz photos and I love those, but I am unable to resist the urge to do some further editing of some of these shots... so I present to you a place for LolMoz shots.
And so I begin, with a repost from Frink or somewhere... 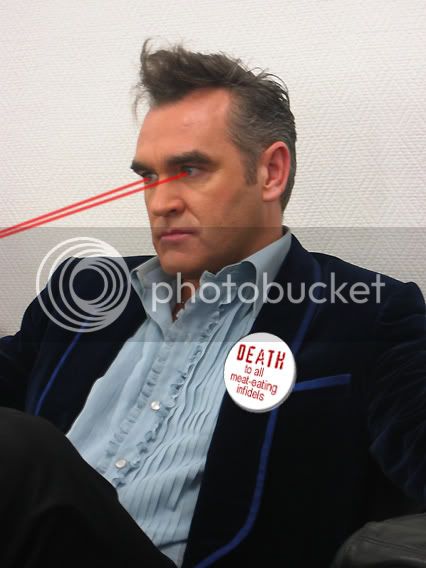 An LOL'ing page! Oh no you didn't start a thread that will keep me here all day... You know how I love laser beam eyes Moz. Girl, you've got a hundred more where those came from. I'll be back for the therapy later. Sweetness! I'm awful at photoshop but I will have a great time LOLing at everyone else's pics.
C

I think I was posting on the unflattering thread pretty much right when you made this one, PFTLT!

I've got to think of more lolmozzers, but here's my one contribution (thus far):
Last edited: Sep 2, 2007

Who did this one? These aren't exactly in the LOLcats manner, but I do find them humourous.
Someone, again I don't know who, did a Grand Theft Auto version of Moz.

Here is one done in the lolcat style. See attachments for comparison.

I've searched in vain, but I couldn't find a piccy of Moz groping the air in front of him at chest level with BOTH hands. I've seen him do it on rare occasions during Lemme Snog Ya.

I`ve got my dunce hat on.....but do you have to pay for this photoshop?My computer seems very limited.
.....in a snow filled sky, we'll make it all right to come undone.

Yes, normally, one is supposed to pay for PS. Someone gave me PS for free, but I don't have the key code to unlock the program. So I ended up deleting it. I think my friend gave me the code in the email with the file zipped and attached, but I can't be bothered to find that email message in a box of over 1000 messages.

I downloaded the GIMP. It's free, but it's slightly tricky getting used to it.

I had some trouble trying to do multiple manipulations (save a layer on top of a piccy, background fill/erase text, and add text boxes). It wouldn't let me do it all at once, so I saved the image each time I did one level of work on it. Flattened the image, then saved it under another name. Closed it, reopened it and worked on it again.

I think it's still relatively straightforward and easy to learn compared to photoshop.

I'm up and can't sleep. Here's a LOLMozzer I just did.

I took the image from http://www.andrewkendall.com/ This is from the unusual photos thread and I didn't make it, but I love it!

Mel_Torment said:
I downloaded the GIMP. It's free, but it's slightly tricky getting used to it.
Click to expand...

you have my respect for being able to use the gimp without bursting into tears. "Excuse me, Morrissey? I have a few more questions for you..."


Mel_Torment said:
Who did this one?

Ha Ha! This pic just keeps getting 'worser' So unflattering.

Claudia2006 said:
This is from the unusual photos thread and I didn't make it, but I love it!
Click to expand...