Iconic image: The Smiths outside Salford Lads club - The Independent
By Matilda Battersby

The Smiths' 'The Queen Is Dead' shots by Stephen Wright - NME.com
This week's issue of NME marks the 25th anniversary of the release of The Smiths' classic 1986 album 'The Queen Is Dead'. We've collected together some classic photographs of the band from that time taken by rock photographer Stephen Wright - have a click to see some of his best shots and read what he had to say

This is a charity auction for the famous Salford Lads Club. The item has been generously donated by photographer Stephen Wright who took the original iconic photograph of The Smiths outside Salford Lads Club, and so has absolutely impeccable provenance.

In early 1986 Rough Trade sent Stephen Wright some artwork proofs for the inside of the Queen Is Dead. One was the used 'green-washed' photograph version, the other was the one you see here - an unused Greyscale/B&W photograph, with pink text on the left of the photograph, which as most will know, didn't make it to the final artwork.

This has been inside a cupboard in Stephen Wright's house for 25 years. It has some small cracks and a bit of yellowing to the rear (unprinted plain cardboard), but is in otherwise good shape. Stephen Wright has signed the item on the bottom right. The size is 24 inches by 12 inches approximately.

This is a rare chance to obtain a piece of Smiths/Morrissey memorabilia with an impeccable provenance. Collectors of such items will realise that the unique character of this proof make it an absolute one-off.

The winner of the auction will be contributing funds to the Salford Lads Club the moment the auction is over, and the item will be posted by Stephen Wright to the winner. Low starting price. 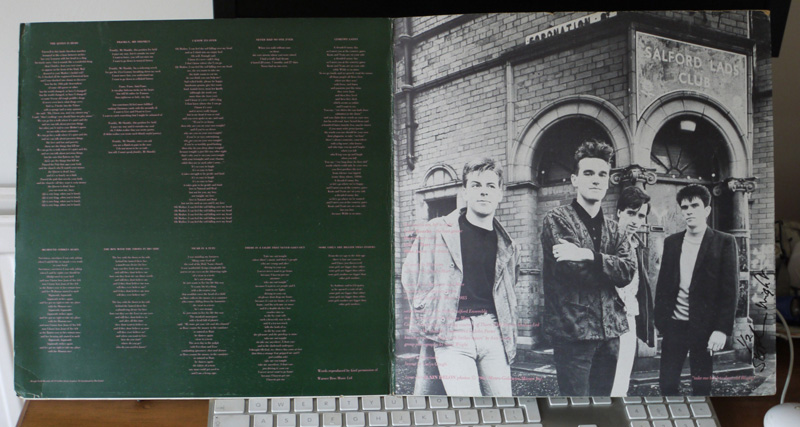 enough newsitem regarding the 25 anniversary of The Smiths release album
' The Queen is dead'..., and Mr Wrights iconic inner sleeve pic of The Smiths
in front of The Salfords lad club

I'd rather have seen a remastered album, as with all Smiths albums

due a certain circumstance, it isn't possible, or at least 1 member would
hold it, a song release from this album's 25 year released, would've been
the ultimate to release a single from it

' and they say he's mentall'

Shut up you saggy bummed dutch trifle!
Troll post
Last edited by a moderator: Jun 21, 2011
A

All albums ARE remastered, but not on CD. If you got the Rhino UK vinyl re-issues, the vinyl is remastered and you also get MP3s in 320kbps on a download card (not included in U.S. Versions). Remastered by Frank Arkwright and Johnny Marr. Only the 4 albums though, plus the Singles box. However, the proper version of Stretch Out and Wait hasn't been remastered. They did the alternate lyrics one twice in error.

Stephen Wright has generously decided to include as a bonus item a signed 'Smiths outside the Salford Lads Club' print (as seen ong the front page of www.smithsphotos.com).

P.
You must log in or register to reply here.