I'm sucker for reading GQ and Esquire magazines. Both the UK and American editions. Came across this little bit about Morrissey written by Tony Parsons in the June GQ (English edition). I don't think it's been acknowledged on Morrissey Solo. Tony's column was looking at how the older you get rock music seems less relevant. Morrissey and Julie Burchill together. Now that would be a good gossip session. Opening paragraph.


"I realised that rock music was getting a bit long in the tooth on the day that Morrissey came around to my house for tea.

I was newly married, and as I fussed over the tea and biscuits, my young wife called out to me when she saw our visitor approaching.

"Darling" she said. "There's an old man coming up the garden path". I almost dropped the Jaffa Cakes. An old man? Morrissey? An old man? This was not last week. This was way back in the 20th century when Morrissey's solo career still seemed like a bit of a novelty, and the Smiths still...
Continue…

The great rock'n'roll sellout - by Dorian Lynskey, The Guardian
Gone are the days when bands would be scorned for getting into bed with corporate sponsors and brands, so what ever happened to "selling out"?

The new battleground was adverts. In 1988, Neil Young mocked the practice in This Note's for You: "Ain't singin' for Pepsi/ Ain't singin' for Coke/ I don't sing for nobody/ Makes me look like a joke." But indie never faced such a dilemma – Coca-Cola weren't exactly in hot pursuit of Dinosaur Jr or Foetus in 1985. Marks says that at Homestead, "I'm not sure we could have sold out if we'd wanted to." Travis agrees: "It was a very different culture then. If someone had been clever enough to give the Smiths half a million pounds to do an ad, I would have been very interested to see what they would have said."
Continue…

He's considered by many to be a bit of a Bigmouth, but those who have got to know Joey Barton have often asked: 'Who's This Charming Man?' 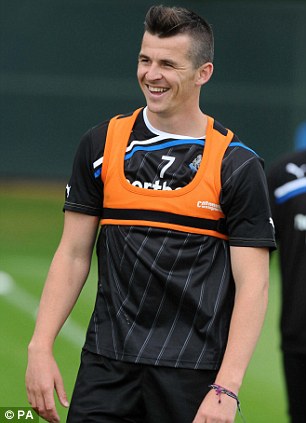 Tomorrow. Don't do that to me. I'm sat at home wondering if I should be on a train right now!
Continue…

Morrissey does not wear shoes by Deux Souliers - true-to-you.net

Morrissey would like it known that he does not wear shoes by the company called Deux Souliers, and has no intentions of wearing shoes by this company.

Link to info at See Tickets posted by fergal_41

Update 7:40 AM PT:
News of the link at true-to-you.net posted anonymously. Kristeen Young to support.
Continue…

This week's Sports Illustrated lists the Alltime Top 40 Sports Songs. "Munich Air Disaster 1958" comes in at number 27... one of the oddest Morrissey appearances to date.

Think about the shock it would be in this country if an NFL or MLB team's plane went down midseason. That's what happened to English football when Manchester United's plane crashed during takeoff on an icy runway during a refueling stop after Man U played Red Star Belgrade in the 1958 European Cup. Over half the players were killed, and others were injured too severely to play again. The overwrought emotion Morrissey brings to the song makes a larger point about fandom and the tragedy of athletes dying young.
Continue…

I hate to say this, but he looks sickening good on the big screen
http://yfrog.com/gzvkfyxwj (from FatGayVegan)

"Lou was haggard god bless him, Iggy was nuts, morrissey is just coming on."
"Morrissey now. A spring chicken compared with the rest"

Strange/unexpected Moz references?
15 minutes ago
born to mourn and yawn
Post Millennial: "Morrissey: How did the...
Nerak, for the love of god is there any chance you could wind your neck in...
45 minutes ago
Painting and Drawing
Hey LH I like the idea...pay them $5 for the pic, then charge them $80 for...
Today at 2:27 PM
Mozmar
Morrissey Central "ROBERT PATTINSON" (October 20, 2020)
thank you Sam
Today at 2:22 PM
Ketamine Sun
Morrissey Central "LA CERVEZA" (October 19, 2020)
By one of my faves: Willy Russell. Regards, FWD.
Today at 1:44 PM
Famous when dead
Bradford Interview with some Moz content
Ha ha good joke, "Aztec Camera" means "keep on scrolling, nothing worthwhile...
Today at 1:16 PM