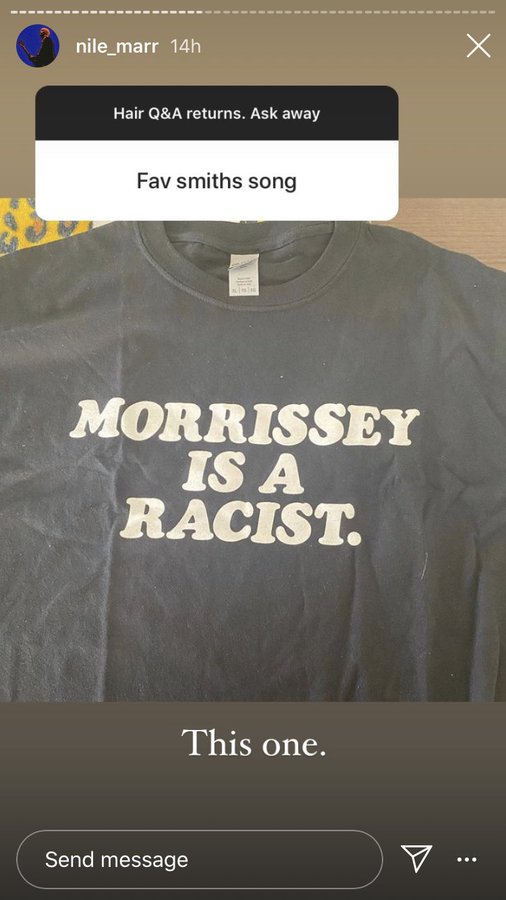 ...reporrting the passing of Dele Fadele, a pivotal figure in the NME and particularly famous for his part in the 'Flirting With Disaster?' cover story about Moz's attitudes towards race.

Dele personally told me that Morrissey had sent over a drink - probably a pint of cider - to Dele when both were in the Good Mixer during Moz's stint living in Camden, and he took it it to be a burying of the hatchet of sorts.

Tributes have been paid to the former NME writer Dele Fadele, whose death has been confirmed.

It is thought that Fadele died in 2018 of unknown causes, but his passing only became public knowledge last night (August 20), as LouderThanWar...
Other People/Bands
Continue…

"It was seven years ago that Robbie Keane discovered he's related to Morrissey, the frontman of The Smiths.

The two are cousins, a fact Keane's mother had forgotten to tell her son.

"You can see the resemblance - he's the image of my uncle," Keane told BT Sport before recounting how found out about his connection with the famous singer.

"I was in L.A. and I was in a shop. You might remember Dougie Freedman who used to play with Crystal Palace.

"One of his friends was in the shop. He said 'Ah, listen, my name is Liam and I'm best friends with Dougie Freedman and I look after Morrissey.

"I rang my mother and asked, 'Am I cousins with Morrissey?' She says 'Yeah, my mother's mother and his mother as sisters'. I said, 'You only took 20-odd years to tell us that Morrissey is our cousin?' She goes, 'Ah, I forgot'."" MESSAGES FROM MORRISSEY - MORRISSEY CENTRAL - REAL MEN OF THE HOOD, 2020 A couple of random (and trivial) Moz references:
A member of the Kpop band 'Ateez' is wearing a Morrissey T-shirt in the promotional videos for their new album:

Also, a few days ago, Hideo Kojima tweeted this: Famous for her vocals on Screamadelica, the Manchester-born singer was due to release her debut solo album this year

A bit of 'discussion' in the comments.
FWD.
Other People/Bands
Continue…

RadioX: Doves: The Smiths' art will always be there despite "unsettling" Morrissey

RadioX: Doves: The Smiths' art will always be there despite "unsettling" Morrissey. Doves: The Smiths' art will always be there despite "unsettling" Morrissey

Drummer Andy Williams has talked about his love for The Smiths and insisted they will always be "an amazing band".

"Kill Uncle" at 30: Oddball album or timeless...
Yeah, I just think folks should keep in mind why songs/albums that caught...
4 minutes ago
Ketamine Sun
Johnny Marr's Easy Money sounds like Dashboard...
:rolleyes: Oy triggered.(n) the little 🐸 remade his sucky song.(n) you...
6 minutes ago
Book of Condolence Thread
Larry had Type-2 diabetes and had suffered from lung cancer, angina and...
15 minutes ago
ACTON
What song are you listening to right now?
26 minutes ago
Morrissey ‎– Alma Matters LP bootleg
My personnal copy
30 minutes ago
Lustman
It’s not about politics
World,America you must get on all fours for the new Woke House Of The United...
48 minutes ago
Breton La Villain